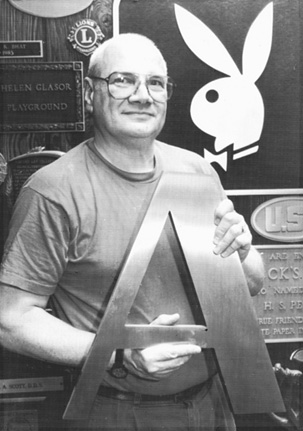 Thank you for choosing Architectural Bronze & Aluminum Corp., a four generation family owned corporation. For the honor and integrity of a precious crafted, finely designed cherished bronze plaque - look no further than Architectural Bronze & Aluminum Corp. As the master artists of old created beauty, we professionally create and produce, with care, your classic design limited only by your imagination.

Honor, integrity and beauty are the final products we create in everlasting, durable quality bronze. Exhibiting information in a museum or gracing the façade of a university, hospital, or government building, bronze identification in plaque or individual letter describes and memorializes achievements in the highest form. Architects' concept of your own inspiration, our craftsmanship will create a unique graphic presentation. Distinguished medallions, artistic statuary or any identification will be cast in ageless bronze.

We appreciate your consideration. Bronze - A notice of identification or recognition of appreciation, now and forever will remain everlasting images to remember.

Stepping into the Architectural Bronze Aluminum Corp. at 3638 W. Oakton in Skokie is like going back in time.

The shop, one of the last of it's kind in the world, is a cross between an old-fashioned smithy and turn-of-the-century metallurgy factory.

In his shop, decorated with antique furniture, owner Ken Cooper is able to customize bronze plaques, signs, trophies and medals with machinery - including one dating back to the pre-Industrial-Revolution 1800s that originally operated under water, then steam and now electric power.

The old-fashioned setting suits Cooper just fine. "My belief is that a machine made well in the past can last almost indefinitely if well cared for," he says. Cooper vows never to scrap his machines, but instead to donate them to a museum when the time comes.

Cooper inherited the enterprise 30 years ago from his father, founder Harry Cooper. The elder Cooper opened the business in the 1920s at Belmont and Western avenues in Chicago.

Now, with the help on the sales side from his wife, Betty, and 26 year-old son, David, and on the artistic side from his 18 year-old daughter, Berri-Lynne, who works on engraving, Cooper continues the family tradition.

"When we were first founded, our customers were primarily architects and builders," says Cooper. "At that time, it was customary for buildings to have a bronze plaque on the outside commemorating someone or listing a founding date. It was the signage of its time, like neon today."

His trophy engravings run the gamut from the usual loving cups to the 6-foot-tall, 160-pound, keepsake bronze Palma trophy replica Cooper made for the American Firearms and Shooting Organization. Cooper had to recreate the man-sized cup from an old set of 19th-century drawings made by Tiffany & Co.

"The original 1878 trophy was stored for some reason at the War Department in Washington, and got crated up and lost somewhere like the Ark in the Indiana Jones movie," says Cooper. "All I had to go by were an old set of original drawings that, when I opened the pages, began to decompose in my hands. Luckily I had them blueprinted."

Other unique orders make up Cooper's inventory of customers stories.

"Mayor Richard J. Daley was once doing a promotion at the Stockyards Inn and he accidentally stepped into cow manure," Cooper recalls. "So the restaurant owners collected the manure with the shoe print in it and had me make a cast of it, which they gave him as a special award."

Cooper was even contracted by Playboy, when it was still headquartered in Chicago, to make the giant bunny-shaped plaques for its first seven American Playboy clubs.

And once he made a plaque for a bereaved wife who wanted to commemorate her husband, who was eaten by a shark. The plaque was placed on a large, upright crucifix at the bottom of Lake Superior during a service attended by over 100 divers.